Let’s start off with the 1st question: What character do you love to write the most?

Hmm… I would have to say my original character Laura Jane Riker. Riker’s oldest daughter: 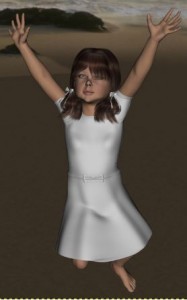 She’s a lot like her father Will Riker in so many ways. Sometimes her adventurous spirit gets her into mischief.  But what child doesn’t get into mischief? She is the oldest of 4 children. One thing is for sure, she keeps her daddy on his toes, and isn’t afraid to play in the dirt.

*Original character made with DAZ Studio 4.6*

2 thoughts on “Week 7 Blog Like A Boss Prompt #4: What character do you love to write most? What about them makes them so compelling?”

You will find a variety of fanfiction and prompts here.