So, this one is my Post #0 since I posted it before I knew the prompt for Twelve Trials of Triskelion Week 7 Blog Like A Boss.  More of a fun little piece for you all to enjoy!

It was the little things in life that Will Riker looked forward to after each duty shift on the bridge.  He enjoyed coming back to his quarters he shared with his wife Deanna Troi and his four little girls, Laura, Lily, Carmen and Mayra. Sharing a meal with all five of his girls was always something he cherished after a particularly hard day on the bridge.

He knew that at any one point, all of it could be taken away in an instant. That was the risk he’d taken joining Starfleet. He spent every precious moment he could with his little girls, often playing dress up with the two oldest and having tea parties with them. While playing peek-a-boo with the two youngest who were only 4 months old.

Riker smiled as he sat and had pretend tea with Laura and Lily. He remembered each and everyone of their births as if it were yesterday. Laura came into the world early, by two months, but no one would suspect it now, looking at the strong and healthy seven year old. Lily on the other hand was on the other end of the spectrum. She was born 2 weeks past her due date.

Unlike her sister, who only weighed barely 2 kilos when she was born, Lily weighed a whopping 4 kilos and had a good set of strong lungs to go with it. Lily was now 5, and more and more like her father each and every day.  Then came Carmen and Mayra.  They were the surprise for both Will and Deanna.  The couple hadn’t expected a pair of twins at all. But of course, it was part of the little things in life they enjoyed. Having a family and spending time with them were the most important things.

Laura brought Will out of his thoughts.

“Daddy? Would you like another muffin? And some more tea?”

Riker nodded and held out his plastic plate while the other hand held up his tea cup to Lily who poured water into it.

“Thank you ladies. These muffins and tea are wonderful.”

Both Laura and Lily giggled and began reaching for more muffins. After arranging them on a a tray, Lily reached for the plastic beads around her teddy bears neck and put them around her father’s.

“Now you look even prettier daddy. You have a nice necklace.”

Laura gave her daddy a small mirror and he admired the plastic beads around his neck.

“I have to say Lily, this necklace does go with the color of daddy’s uniform.”

Sitting back, Riker sighed. Yup, it was the little things in life that couldn’t get any better than this.

I am also linking this to the Archive.  If anyone would like to have a look at it over there. Titled: The Little Things

I hope you all enjoyed this.  🙂

Ok, since the Prompt a Day Challenge is now officially locked, even though it’s 10 p.m. Western I’m posting the link of where to find the last part of my fanfic Cold and Lost on the Archive. Here it is:

I hope I haven’t lost my readers. Since this is now disqualified. Sometimes I wish everyone was on the same time. 🙁

So I’ve had this idea for awhile and I decided to write this for the Weekly Free Write #124 Back-to-Nature.

As per-usual in my fics I put Riker/Troi through a lot of different scenarios. I find this one unique to my writing style because of the premise I’ve decided to use.

Summary: When their shuttle crash lands on the seemingly uninhabited planet of Veeloze 10, Troi, Riker and Doctor Crusher must find shelter in a series of caves that may hold more than they bargained for.

Here are the 1st two chapters for everyone to sink their teeth into:

Will add cover art later.  Working on it in GIMP.  Feel free to let me know what you guys think! Thanks!

So this was a week in the making but here it finally is, so without further ado here is chapter 1 for Star Trek: Rogue Officer Book 2:

Book cover coming soon. Suggestions on what I could put on the cover in the comments is most welcome. 🙂

So, I’ve decided I’m going to start a TNG series called Rogue Officer.  Although, that might just be the working title.  Any suggestions in the comments is helpful.

In the series I’m going to include at least 3 stories, it may be 4, I haven’t got everything fleshed out yet.

The first in the series is the entry I entered for the Ficlet Flashdance for the Twelve Trials of Triskelion 2014: Chaos Erupts.

The second story I’m working on at the moment is called: A Sacred Trust Broken.  This one will primarily go into who the mole in Starfleet is. A doctor that Riker used to work with by the name of Eric Sartos.  Some of this will be AU, kind of giving you a peek at what Riker did with his life before he chose to go down a command path in Starfleet.

The Third story is: To Be Determined. I’ve got only vague ideas where to go with this one.

I will let you guys know what I come up with soon.

For those of you reading my Riker/Troi fanfic The Light In Her Eyes I’ve updated with chapter 6:

And here is the brand-new re-done banner I’ve made for it using only Screencaps from TrekCore: 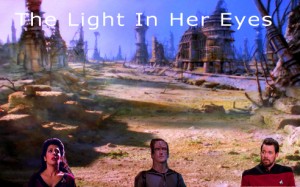 This idea actually popped in my head while I was collecting the garbage at work one night about a month ago. I thought: Well, I’ve never written a fanfic yet that has to do with the events of The Occupation of Bajor. At least a scenario that happened during that particular event in the Star Trek timeline. Part of the idea came to me while reading the Next Generation book: The Battle of Betazed.

After a Cardassian warship crosses the border from the Neutral Zone into Federation space, they board the Federation flagship and kidnap Counselor Troi, taking her hostage on a planet they claim is rightfully theirs for colonization.

Banner can be found in chapter 6 update.

Here are the 1st five chapters. The fanfic mentioned above can be found here:

Comments are most welcome! Knowing where to improve my work is sometimes tough though. 🙂

Ok, so I came up with this TNG fanfic from a dream I had one night. So I decided to make it into a story.  It took me some time to flesh all the details out. As far as characters go, Riker and Troi are easy for me to write.  I do my best to make sure they are very much in character.  I thought: What if Riker and Troi had been transported into the past and were caught at Area 51?  Q obviously has his hand in this.  Below you will find the fanart/banner for the fanfic.

Synopsis: When Q transports  Commander Riker, Troi and Doctor Crusher to the past, they are arrested at Area 51. Can they figure a way out? Or will they be kept prisoners in the past for good? Slightly AU.

Here is a placeholder for the banner.

This fanfic listed above can be found here:

*This fanfic is completed.*

Comments are most welcome. I hope some of you will let me know what you think! I’m always looking for ways to improve my work.

You will find a variety of fanfiction and prompts here.